A young sports journalist, a murky morass, and a highly-charged time in college athletics

COLUMBIA, 8/7/11  (Beat Byte) --  From inconsistent testimony to witness recantations, a growing list of circumstances could create "reasonable doubt" in the 2001 murder of Columbia Daily Tribune sports editor Kent Heitholt.   Add to that list a collegiate athletics scandal that tarnished coaches, athletes, trainers, boosters -- and reporters -- when Heitholt worked as a sports writer in Tennessee.

Fifteen years before his death, Heitholt and a photojournalist got caught up in a murky and tragic morass that seized the public's attention.   On January 9, 1986, University of Tennessee Volunteers (UT Vols) star quarterback Tony Robinson, 21, and former Vol fullback Kenneth "B. B." Cooper, 22, were arrested on charges of selling cocaine to undercover cops.

NCAA rule violations, athlete suspensions, and questions about who was supplying the two football players with dozens of grams of cocaine followed, rocking the University of Tennessee and casting a wide, unsavory net at a time when drug use was reportedly rampant among college athletes.  Star University of Maryland basketball player Len Bias would lose his life to a cocaine overdose just a few months later.

On January 20, less than two weeks after Knoxville police arrested Robinson and Cooper, management at the 110-year-old Nashville Banner newspaper concluded what they described as an "intensive investigation" sparked by a "tip from a confidential source."

Robinson and Cooper went to prison; Heitholt left Tennessee for The Shreveport Times and later, the Tribune;  Thorup still works in Nashville; and in 1998, the Nashville Banner ended a century-and-a-quarter run.

Nearly 20 years after the Vols scandal broke, Columbia residents Charles Erickson and Ryan Ferguson (right) were sent to prison for Kent Heitholt's murder, which Boston College victimologist Ann Burgess characterized for an appellate brief this year as a "revenge killing, in retaliation for a perceived wrong, real or imagined."


Police looked for any potential enemies, Burgess explained, even newspaper readers who may have been disgruntled with Heitholt's columns.

But no enemies emerged, and neither Ferguson nor Erickson even knew Heitholt.

With the revenge theory in mind, attention turned to the last man who saw Heitholt alive -- journalist Michael Boyd, whom an investigator hired by Ferguson's appellate attorney openly accused of the homicide.  "It is our theory that [Boyd] murdered the victim," private investigator Matthew Allen wrote in a report presented as evidence in a recent appeal.

But the focus on Boyd -- rumored to have had a workplace grudge against Heitholt, his boss at the Tribune -- is unfair, claim former co-workers.   Reports indicate, moreover, that law enforcement authorities did not investigate Heitholt's past much beyond his five years at the Tribune.   [Burgess, Ferguson appellate lawyer Kathleen Zellner, and the Columbia Police Department did not respond to interview questions.]

Considered a Heisman Trophy candidate, Tony Robinson -- who played for the Vols from 1982-85 -- set several passing records and appeared on the cover of Sports Illustrated alongside the title "The Tennessee Waltz."  The year prior to his arrest, the Tennessee Vols had won the Southeastern Conference (SEC) Championship and defeated Miami in the Sugar Bowl.   Despite an injury, Robinson planned to join the NFL.

It was a magical season Vols fans are more likely to remember than any other, including a 1998 championship year, Knoxville Sentinel sports writer Mike Strange told the Heart Beat. 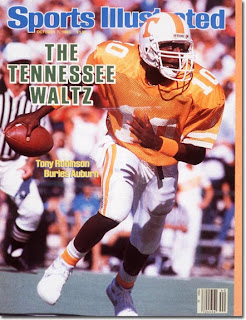 Needless to say, Robinson's arrest with Cooper shocked the college sports community, where the "quarterback had been hailed as a fallen hero," AP reporter Steve Baker wrote.   Hundreds of headlines blared the news for months.


Though it seemed a sign of the times they were chronicling, equally shocking came headlines that Thorup and Heitholt had been fired for illegal drug use on the job.

"The Nashville Banner cannot and will not tolerate or condone employees using or being under the influence of controlled substances while working or otherwise representing the Nashville Banner," publisher Irby Simpkins said at the time.


Neither Heitholt nor Thorup ever commented publicly.   [Thorup did not respond to Heart Beat interview questions.  Robinson -- who dropped out of sight years ago and reportedly has no contact with his family -- was not located, but was last thought to be living in Florida.]


Witness(es) for the prosecution 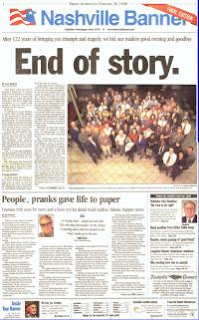 A few days after the journalists' termination, the Nashville Tennessean -- the Banner's local rival -- and the Associated Press (AP) reported that Heitholt "also had been with University of Tennessee athletes using cocaine."   AP editors were confident enough in their information that they titled the story, "Fired writer, Vol cocaine use linked."

At a subsequent news conference, Simpkins told reporters that Banner management "didn't have enough information" to confirm or deny that either Heitholt or Thorup ever used controlled substances with any athletes.  "But obviously, these two men did not sit in a room and partake in this process by themselves," Simpkins explained.

Knoxville police seemed to concur.  More arrests in the Robinson case might follow, Knoxville narcotics detective Lt. Jerry Day told the AP.   Though they knew of no links between the journalists and the accused athletes, Day said he nonetheless wanted to interview Heitholt and Thorup, "to find out if they have information we need to have to follow our investigation, and if they'd be willing to work with us."


Now retired from the police department and working as a private investigator in Knoxville, Day -- who expressed surprise at the news Heitholt had been murdered 10 years ago -- says he "doesn't recall if I or another officer interviewed either Heitholt or Thorup."

Day did explain that local media were heavily involved in the drug investigation and confidential information about it spread beyond law enforcement.

"Reporters even picked up on one of our wired informants," he told the Heart Beat.  "One media group -- I think it was a television station -- actually paid a couple to move out of an apartment next to where Robinson and Cooper were dealing drugs.  At the time we went to arrest them, reporters popped out with their cameras.  It was quite a shock."

The Sentinel's Mike Strange -- who knew Heitholt and Thorup -- said he didn't think either journalist was directly connected to the Robinson/Cooper case.  "I believe the accusations against Heity [Heitholt] involved doing cocaine with the basketball team," explained Strange, who said he recalled a coach asking players in a locker room "if they had ever done cocaine with Kent Heitholt."

Strange also recalls that his editors knew about the pending bust beforehand, even asking him to sit next to Robinson on a flight to catch the arrest.  "That was absurd, because we didn't travel with the athletes," Strange said.

Though no other arrests made headlines, a long-brewing scandal finally exploded across the University of Tennessee.