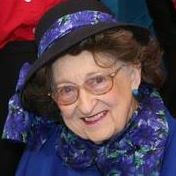 COLUMBIA, 10/28/11 (Beat Byte) -- Featured in countless local news stories for what Columbia Tribune columnist Bill Clark called her "tireless" commitment -- right into her eighties -- to everything from women's rights to the restoration of the Heibel-March store, retired journalist, poet, and former Columbia assistant librarian Betty Cook Rottmann, 89, died Wednesday in Fayetteville, Arkansas, where she had been living with her children.

She suffered a massive stroke Monday night. Though she had not been expected to live, Betty's family and friends asked that we let readers know so they could keep her in their prayers and thoughts.

A 1958 graduate of the MU School of Journalism, Betty Cook Rottmann (above) was a special friend to neighbors in North Central Columbia, where she lived much of her adult life.

For many years, Betty served -- with the artist Don Choate -- as one of two elder states people on the neighborhood association board she helped create. Whenever Don or Betty spoke, the most contentious meetings with some of the town's most forceful personalities calmed right down.

Petite almost to the point of being dainty, Betty never left home without one of her trademark colorful hats. And when she was out and about, Betty spoke truth to power and stood up for the little guy (and gal) in an unusually irrepressible way.

As she got older and more frail, Betty moved slower, but rarely missed meeting with the people who were close to her heart. This writer drove her to a Democratic Party chili supper, a League of Women Voters forum, and a couple of neighborhood association meetings before she sold her longtime residence at 1200 Coats Street in Columbia's North Central Village.

Restoring the Heibel-March store on the corner of Rangeline and Wilkes Blvd. -- just blocks from her home -- was Betty's last big dream, which she shared with countless neighbors and groups. She wanted the building transformed into community meeting space with area for the arts, a bit of theatre, and what she called "a place people could just come in and love."

It was over that restoration effort Betty and I first connected, both of us viewing the forlorn little brick building as a metaphor of both larger social inequities, and hope for the future of the neighborhood she adored. It was Betty's love for the place that prompted me to spend my own money on it, and with help from Carl Edwards, Sr. and Mid-City Lumber, repair its crumbling back roof, some windows, and even lend money for a building permit to finish the rest.

Where I was furious and impatient with the inflexible confederacy that kept the building down, Betty was jocular and patient. "It will happen -- some day," she used to tell me, in a tiny uplifting voice she turned to causes and creations many times over her nearly nine decades on mother Earth.

In her honor a few years ago, my family and I purchased a seat that bears a plaque with Betty's name in the Missouri Theatre. She was quite tickled, and promised to sit in that seat -- and wear her finest hats -- any time she went to the show.
For her role in the Heibel-March restoration effort and a very different role -- as women's rights advocate Amelia Bloomer she played for groups and clubs around Missouri -- the Missouri Humanities Council honored Betty with the 2003 Governor's Humanities Award.  High tea at the Governor's Mansion and a resolution from the Missouri House of Representatives soon followed.

"Whereas Betty Cook Rottmann is perhaps best described as one who is perpetually dedicated to those individuals and institutions most in need and whose voices would not be heard without recognition, appreciation and encouragement," the resolution read.

"That pretty much sums up this busy octogenarian," Trib columnist Clark wrote. "Betty has enough awards for two lifetimes, but awards, though nice, are not her thing. There are many battles yet to be won. Today finds Betty on the front line in many places."

A few years later, Betty likened a poem she wrote called "Bird Song" to the tribulations of growing old in a Columbia Tribune article. A cat has just attacked a small bird and destroyed its eggs, upsetting a child. But the bird still sings.

"How can it sing?" the child asks. As discovery dawns, she answers her own question. "The song is all that's left."
-- Mike Martin for the Columbia Heart Beat