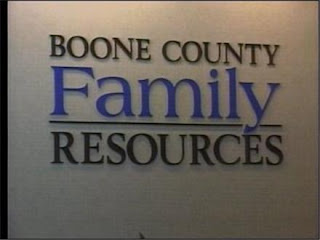 Fourteen parcels in a small North Village neighborhood -- but for what, exactly?

COLUMBIA, 10/29/11 (Op-Ed) -- My sister Stephanie had muscular dystrophy. She lived at home her entire life. Organizations like Jerry Lewis' Muscular Dystrophy Association and State of Nevada health services were around 24/7 for 22 years -- from the time she was diagnosed at age 6, to the time of her death at age 28 and all of 57 pounds.

Helping make sure she could stay home -- rather than in a hospital, institution, or group home -- was the job of those agencies.
Helping people like Stephanie stay home is also the job of Boone County Family Resources (BCFR), a publicly-funded service organization designed to help persons with developmental disabilities in accordance with a law called Senate Bill 40.

With a charismatic leader -- Les Wagner -- who gave one of the most stirring and heartfelt speeches I've ever heard before a group of disability advocates -- BCFR does good work and has helped many people over the years.

But Wagner's easy eloquence belies an iron-fisted organizational control that dates back decades and suffers no interference, as neighbors in the North Village area around St. Joseph, Walnut, and Hubbell streets have found out after questioning BCFR's aggressive land buying tactics.

They are trying to protect their homes and their ways of life against what many think is merely a land "bank" for powerful development interests.

The idea makes sense.  Director Wagner has admitted entertaining an offer to build the Odle family a parking garage for next door student housing; he's involved in a "condominium retail space" development connected to the Short Street garage; and he has quietly acquired 14 parcels of valuable land in the small, tightly-knit neighborhood over the past decade.


From the leader of an organization presumptively dedicated strictly to disability, these other activities seem like more than just administrative over reach.  But with directors who've been on BCFR's board for years, if not decades, few are likely to question Mr. Wagner about all this except neighbors who will be adversely affected.

Although director Wagner -- who has never responded to interview requests from this publication -- maintains that his organization will use the land for client housing, that concept goes against their stated mission. When my wife joined the BCFR Board of Directors a few years ago, the big push was to change the name from Boone County Group Homes to Boone County Family Resources to reflect their in-home, family-oriented mandate.

"Over 93% of children served live with their parent(s)," their annual report explains. "The single greatest cause of unwanted out-of-home placement is a lack of appropriate family and community living supports."

Charts in the report show how few adults live in BCFR-owned facilities -- "group homes" reserved for the agency's most severely-disabled clients, or clients without family or friends.  "Most of the persons helped by the agency are served through the Family & Community Living Support program," the report explains. "Persons served live with their families and in the community."

BCFR's list of services and programs, in fact, says nothing about "building housing for persons with development disabilities."  That job has traditionally gone to the Columbia Housing Authority (CHA), a situation CHA director Phil Steinhaus acknowledged in a 2007 Columbia Tribune article.

"Steinhaus...explained that many projects he’s looking at for the next 15 years would be partnerships with other organizations.  CHA would provide a housing component and another association, such as Phoenix Programs or Boone County Family Resources, would offer social service supports."

The BCFR program closest to a housing goal is the agency's Supported Living Program, which last year helped 47 persons -- just 3.5% of BCFR's 1,317 clients.

So why is Les Wagner buying so much land?

Wagner has told other news outlets that BCFR's recent development activities are all in the name of helping people with developmental disabilities. But North Village neighbors aren't buying it.  They have urged that the agency to use its sizeable cash reserves -- by some estimates between $5 million and $10 million -- on the families it is charged with serving, rather than on vague, costly land acquisition plans that only become apparent when a controversy ensues.

Now, of course, those properties will generate no property taxes.
Question any of this, and you soon learn that Mr. Wagner prefers to keep the public out of his agency's business, despite taking a hefty share of public tax dollars -- nearly three times more than Boone County's roads and bridges.  In fighting to keep prying eyes out, however, all director Wagner has done is to increase suspicion, vigilance, and anger.
The latest outrage involves statements Boone County legal counsel C.J. Dykhouse made on the agency's behalf that imply BCFR isn't part of the community. The agency "can build whatever it wants wherever it sees fit," Dykhouse has informed City Hall, nearby neighbors, and the Columbia Missourian. As a "quasi-governmental" agency, BCFR can disregard zoning and land use regulations, Dykhouse claims.

Talk about tossing good neighborly relations out the window.
My wife left BCFR's Board of Directors in 2007, with some of the same questions the agency's neighbors are asking today. The land-buying spree had already commenced, and she asked how it could be justified when the agency had no strategic plan and so many other un-fulfilled needs.

She cited a quadriplegic man who gets around town on his motorized wheelchair in all weather from the home he shares with his wife, who has Down Syndrome.

With fellow Board member Steve Tatlow, she wondered why this man wasn't getting more services -- like bus service -- especially after he got hit by a car.  They were both shut down, scolded, and even screamed at, as though they had no business asking such "impertinent" questions.

The situation was so heated it became a Columbia Missourian series (links below).   Both board members ultimately resigned.

So what's the end game? Why is Les Wagner buying so much land?

Neighbors have no confirmed answers, but some have a substantial fear:   That in a few years, when the dust settles and Mr. Wagner retires and the questions die away, Boone County Family Resources will quietly sell its considerable land holdings to developers.  It is the perfect land bank, after all:  no property taxes, no zoning or land use scrutiny, and in one of Columbia's best locations.

If this scenario plays out, Mr. Wagner and his Board will doubtless say it was all in the name of helping their clients.