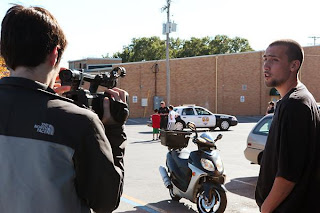 Short documentary raises troubling questions all around, Continued from Part 1

COLUMBIA, 12/11/11  (Beat Byte) --  Another credibility issue appears about a quarter through the video.

Akins films his arrest on an outstanding warrant and flashes a Wanted Poster explaining that he has a record for weapons violations, carries a concealed pistol, and runs the Citizens For Justice (CFJ) website.  Court records indicate that "Matthew Stephen Akins" of Columbia has served jail time on recent drug convictions and faced both eviction and other creditor proceedings.
"For many police officers, it probably makes them question Akins' motivations more than if he had never been arrested," CPD's Schlude told the Heart Beat.  "Based on the large number of officers I have talked to about this, they are less open and friendly to Akins because they are suspicious of the motives of CFJ."
Akins (above) said that he is on "municipal probation for driving without insurance and possibly a couple of other tickets," but that he was not aware of the outstanding warrant that led to his arrest.   "At no time was I even alerted to the fact that I had a warrant, and municipal warrants don't show up on Casenet," he told the Heart Beat.
He was also disappointed that schoolchildren touring the police department saw the Wanted Posters, which listed a previously unlisted Citizens for Justice website.
"The poster indicates that I 'run the cfjweb.ssos.us website,'" Akins explained.  "This was the unlisted version of CFJComo.com that we never promoted and was never found by search engines, but that had been monitored by the Columbia Police Officers' Association (CPOA) since at least December of 2010, when they sent us an email about it."
Including Akins' CFJ affiliation on the Wanted Poster served a "two-fold" purpose, Schlude explained.   "One was to let officers know who he was in the event he approached them on a call, or they saw him video-taping.  The last thing we wanted was a situation escalating if we could avoid it," she told the Heart Beat.  "Second, we do have fairly frequent contact with Akins and he did have an active warrant." 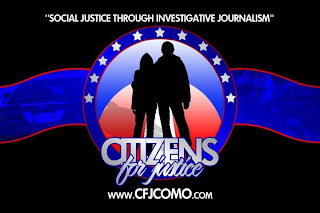 Though CPOA representatives declined to issue a position on the Sheriff vs. Police comparison, Akins' credibility, or the other charges, "We acknowledge that certain individuals have been following police and sheriff's department officers to document what they believe to be problems in the system, which is their constitutional right," CPOA executive director Ashley Cuttle told the Heart Beat.  "We are working energetically toward a more positive relationship with the community where there may be conflict."
On the charge that CPD is less professional than its BCSD counterpart, Schlude said the comparison is like "apples and oranges."   Unlike most of his night-time CPD encounters for instance, Akins instead approached Sheriff deputies during the day, which may account "for police officers using their lights or being more cautious."
A daylight encounter between CFJ and CPD Chief Ken Burton goes well, in fact.  He smiles, quips, and greets the filmmakers on his way from a downtown event.
Citizens for Justice has also made several CPD officers targets of inappropriate private information publishing, Schlude added.  "Officers have expressed concern with some of the information CFJ has posted on their website," she told the Heart Beat.  "Many feel like their police career and job are one thing, but personal information -- even legally-gathered public records -- are not relevant to CFJ's stated cause."
On possible criticism that "because of my run-ins with the law, I just don't like cops," Akins said that while he welcomes critics to form their own opinions, his legal encounters "have given me a wider view of the behaviors and attitudes exhibited by law enforcement officers."
He also stands by the professionalism comparison, both from his filmed documentaries and personal experiences.
"I've been pulled over by the Boone County Sheriff Department multiple times, and regardless of whether or not I receive a citation, Boone County deputies have always shown me a high level of respect and professionalism," Akins told the Heart Beat.  "The only complaint I really have is that they confiscated my police scanner as evidence at a checkpoint.  I was found to be in possession of marijuana."
The Boone County Sheriff Department did not respond to requests for comment.
Part 1
VIDEO:  Boone County Sheriff's Department vs. Columbia Police Department:  Is There a Difference?
http://www.youtube.com/watch?v=SuQ6X5E7s2U
Citizens for Justice
http://www.cfjcomo.com
http://www.youtube.com/user/CFJComo#g/u
Written by Michael Martin