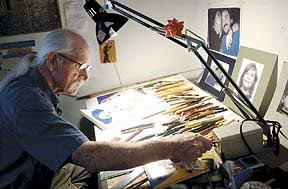 Don Choate, whose easy grace and gentle wisdom helped inspire and shepherd the ongoing renaissance of North Central Columbia's artistic Village neighborhood, has died. He was 88.

Choate's life as an artist, activist, father, and friend took him from delivering ice in his Michigan hometown to studying art in New York City and practicing his craft in Santa Fe. He designed psychedelic light shows for rock bands and furniture with an organic touch. As a graphic artist, he illustrated greeting cards with a keen eye for minute detail.

Turning to portraits later in life, Don's paintings had "depth and an expressive quality that gave a feeling for the place or the person," much like a photograph, Boone County Historical Society Museum director Deborah Slade Thompson told the Columbia Daily Tribune for a 2003 retrospective on Choate's life and work. Working from his home/studio on the corner of Fairview and Coats in the Village, Choate produced artwork that he exhibited locally dozens of times.

Four decades ago, nearing fifty, Choate embarked on a cross-country journey of rediscovery. Opening his home to the counter-culture revolution of the sixties, he camped with nomadic hippies on his New Jersey property; picked apples in Oregon with migrant farm workers; and at age 61, spent a few days in jail after protesting the Callaway nuclear power plant.

"Wonderfully caring and gentle," Choate created portraits that "captured the personality," food bank director Peggy Kirkpatrick told the Tribune. "Not just a good likeness of a person, but he seemed to capture something of their spirit."

Frequently turning his pen to the Tribune's editorial page, Choate urged the community to support a local ballet at the Columbia Performing Arts Centre. "I couldn't believe the dancers I was viewing were high school students!" he exclaimed.

And fourteen years ago, at a youthful 74, Choate penned a prescient letter supporting then-county commission candidate Jeff Barrow, who ran on the Green Party ticket against current southern district commissioner Karen Miller and who now presides over the city's planning and zoning commission. 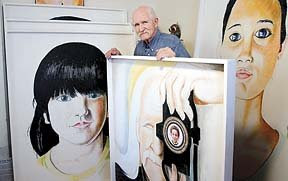 "Green areas must be maintained to preserve the charm of Columbia," Don wrote. "If there is no overall plan, taxpayers are going to have to pay for extended water and utility lines, as well as urban sprawl."

This writer will remember Don Choate for always being there -- at every major neighborhood meeting and every discussion of the things that mattered to his neighbors -- from the Village Arts Team to Neighborhood Crime Watch to the restoration of the Heibel-March Store. He was the softspoken and well-considered voice who helped move dissent to resolution and paralysis to action. "Well, I say we just send that letter" or "let's just call the city," he would say. "It shouldn't be that hard to just get it done."

"He was so many wonderful things, but most of all, he was non-judgmental," Choate's daughter Lenore Danziger told me. "You don't realize it, but that's such a rare kind of spirit."

Don Choate is survived by Lenore and her husband, the photographer Avery Danziger; son, David; daughter, Rebecca and her husband, Pedro; grandchildren: Jason, Sofia, Atlante and Alban; and great grandchildren, Carey and Andrew.
The family invites friends to celebrate Don's life with a retrospective showing of his artwork on Sunday, November 2 from 2 PM to 5 PM at the Alleyway Arts studio on Broadway Alley, parallel to Walnut and Broadway between 10th and Short Streets, behind K-Lani Hair Salon.

Portrait of a man
Artist Don Choate enters a new phrase of his expressive life.
http://columbiatribune.com/2003/oct/20031026ovat055.asp
Photos from Jenna Isaacson at the Columbia Daily Tribune