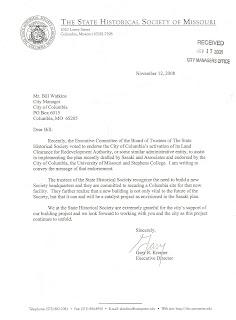 COLUMBIA, 4/26/09 (Beat Byte) -- Surprising and troubling new details about a plan to take private downtown land using eminent domain for a State Historical Society of Missouri (SHSM) headquarters have emerged in 62 just-released documents from the Society and MU. We have previously reported on related documents from City Hall.

Contrary to public representations from SHSM director Gary Kremer, the documents -- mostly meeting minutes and a letter (right) -- show the group planning to use an eminent-domain driven "Land Clearance for Redevelopment Authority" (LCRA) to secure an area that includes Bengals Grill, U.S. Cleaners, and a rental house owned by the proprietors of Addison's Restaurant.

Finally, contrary to public representations by mayor Darwin Hindman and city manager Bill Watkins, the minutes show that SHSM never had much money coming from either the state, the Obama stimulus package, or anywhere else.

A public information request from Columbia Citizens listserv founder Traci Wilson-Kleekamp unearthed the materials, which she has provided to local media.

At SHSM's Dec. 16 executive committee meeting, as it was becoming clear they had nowhere near the $1 million Kremer said the land might cost, according to meeting minutes "Hank Waters urged committee members to be ready to purchase the proposed property and indicated that he would be publishing an editorial in the Wednesday edition of the Tribune urging the city to be prepared to use the power of eminent domain to help the city purchase the property in question."

That editorial appeared the next day.

"The plan for downtown redevelopment...cannot be implemented without city authority to help assemble tracts of land," Waters advised Trib readers in his editorial. "The first and ultimately most important project is the new building for the State Historical Society of Missouri. The prospect of eminent domain holds no implication for owners willing to negotiate...city eminent domain authority will be necessary to achieve the exciting goals of overall downtown redevelopment."

Waters also told the committee that he favored putting the cart before the horse: "urging that fundraising for a new building should follow the acquisition of the property, not precede it," according to meeting minutes. Other committee members, including Kremer and Lawrence Christensen, seemed less enthused with this approach, asking the group to look at immediate fundraising, both to build and operate their new headquarters.

In a Nov. 2, 2008 Tribune article, reporter Sara Semelka wrote, "At a Columbia City Council work session last week, the idea surfaced of having the city use eminent domain to acquire land for such projects. But Kremer said the historical society’s board of directors had not formally entertained that option."

Not true, according to SHSM's Oct. 31 meeting minutes. After a report from Waters, the group's executive committee voted to urge City Hall's use of a new LCRA to acquire the land, necessary for no other reason than to use eminent domain. The group did, however, specifically vote to omit the term "eminent domain" from their letter to City Hall.

Designed to acquire "unsanitary, blighted, and deteriorating areas which constitute a serious and growing menace injurious to the public health, safety, morals and welfare," the LCRA is a creature unique to Missouri state law, and was last used in Columbia 40 years ago to acquire land on the cheap using eminent domain where the Tribune building and downtown post office now stand. See these two links for more information:

In a Heart Beat exclusive, Bengals Grill owner Jack Rader said one reason he was never enthused about selling his properties to SHSM was the most simple reason of all: from what he could tell, they had no money.

Indeed, lack of money takes centerstage at SHSM's January and February 2009 meetings, with Hank Waters pointing to the group's "lack of a fundraising history" and their need to "raise money for the building," according to meeting minutes.

SHSM had to suspend its speaker's bureau for lack of funds, and SHSM board president Doug Crews "alerted trustees to another budget issue by stating there was a possibility the Society would be asked to surrender what remains of the $600,000 state appropriation for building planning." That amount -- for appraisals, architects, and other pre-construction purposes -- was "around $400,000" Kremer told the group, adding that "Governor Jay Nixon has recommended a 7.5 percent reduction in the Society's appropriation for Fiscal Year 2010."

To save money, SHSM suspended microfiching services and sought ways to shift the cost of publishing the Missouri Historical Review. Stimulus funding does come up, but more as dream than reality, with committee members talking about an email campaign encouraging Governor Nixon to include SHSM in any stimulus plans.

The February 25, 2009 meeting ends on a down note, with Kremer, Crews, and committee member Judge Stephen Limbaugh telling the group that "ongoing conversations with the state legislature have revealed that an appropriation for state funds for land is unlikely."
Despite all the glum news, the public got a decidedly different story, in a final pitch for eminent domain just two weeks later.

"After learning that as much as $40 million of federal stimulus money could be available for a new State Historical Society of Missouri building, Columbia's mayor has put the matter of eminent domain back on the city's agenda," Trib reporter Sara Semelka wrote on March 10. "At last week's Columbia City Council meeting, Mayor Darwin Hindman asked that next week's agenda include a first reading of a resolution authorizing the city staff to acquire land on Elm Street. 'I consider it to be a truly valid public purpose where we've got to acquire land in order to make it happen,' Hindman said this morning. 'Our goal is not to use eminent domain, but it is a tool in the tool kit.'”


Our series on the city hall/historical society's eminent domain push:

COLUMBIA, 4/26/09 (Beat Byte) -- Public officials take note: if you can hang with Chuck Dudley, Rick Gurley, and John Schultz, Chairman of the Boone County Libertarian Party, you got it goin' on baby! At least, in the local blogosphere.

Newly-appointed deputy Columbia police chief Tom Dresner was interim chief when he took to blogging on the Missourian's website back in mid-March, to set the record straight in a story about Tasers with Missourian opinion page editor Jake Sherlock.

"Jake, you didn't read my Thursday press release very closely," Dresner blogged, and to good effect. Calling the report "erroneous and "below Missourian standards," Sherlock apologized and made a correction. "Wow, Jake, very nice apology. I appreciate that very much," Dresner blogged in response.

A tall, soft-spoken, distinguished-looking man, Tom Dresner may not be the first person you'd suspect of taking to the blogosphere, especially as chief of police during a period marked by controversy and change. Where other officials tiptoe in, often during an election campaign, and then dash out the minute they get elected or the water gets too rough, Dresner dove in head first and stayed, effectively harnessing the power of a medium that is both one-on-one and public at a time when honest discourse from powerful officials is in short supply everywhere.

"Mary Mary Mary. Wow, where do I begin?" Dresner fired back at Grass Roots Organizing leader Mary Hussmann. "Rick, you're in overdrive today," he quipped on another post, signing it with the online equivalent of a smile :)

The appearance of a public official on a blog -- a police chief, no less -- didn't go unnoticed. "Police chiefs don’t make online comments to stories. It just isn’t done. Public officials don’t speak to the public that way. There’s no filter. Yet Dresner wrote. And wrote some more," Missourian editor Tom Warhover told readers. "The result was extraordinary."

"Lighten up guys. No harm done. Chuck, your argument as stated is too limiting to attempt a reply. Your disdain for Douglass Park is pretty apparent, and your 'solutions' aren't anything that I can begin to reply to."

Powerful words, especially for a police chief. But Dresner -- who has proven an effective communicator across a number of formats, from newspaper to radio -- obviously realizes something that has escaped many of his peers in public service.

To serve and to protect, one must honestly communicate.

COLUMBIA, 4/26/09 (Beat Byte) -- There must be about $5 billion between developer Stan Kroenke and nationwide storage barons Gordon Burnam and sons. So when Columbia-based TKG-Storage Mart announced last week that they were starting a new online social network to help garage bands get started, it was big news to struggling musicians, who nowadays play in rented storage units.

"Selfstoragebands.com was created to give musicians and music fans a place to meet, connect and share," says Storage Mart's Tron Jordheim. "StorageMart Self Storage has noticed an increasing trend of bands and musicians using self storage units for rehearsal and storage space. The sounds of bands rehearsing has become a part of the self storage environment in many self storage facilities across North America."

Selfstoragebands.com allows musicians and music fans to set up profiles, share music and video and to link to their favorite social network sites or band fan sites. It's part of a network of social websites with an unusual twist -- selfstorageblog.com, selfstorageowner.com and selfstoragesocialnetwork.com are all related to self storage.

Gordon Burnam's sons, Mike and Cris, run Storage Mart and recently revived Columbia's Parkade Plaza. Self storage -- as a nationwide enterprise -- got its start in Columbia, in an early partnership between Gordon Burnam and Al Price.

StorageMart is has more than 60 self storage facilities across North America.

Small world tidbit: Gordon Burnam's friend Garland Parman helped him get started in business, by selling eight small houses to Burnam decades ago with no money down. "It was a real estate bonanza," Burnam told the Trib in the article above. Garland Parman was Julie Rader's dad. She owns Bengals Grill with husband Jack.

COLUMBIA, 4/26/09 (Beat Byte) -- Without letting on as to why, the Central Missouri Humane Society (CMHS) has called a "ZooToo.com Press Conference" for tomorrow, the day Zootoo will announce the winner in its Million Dollar makeover contest.

At 616 Big Bear Blvd., Columbia, MO, at 9 a.m., CMHS will "announce changes that will take place after the winner of the zootoo.com contest is announced," said director Patty Forister.

Alas, the earth, it spins around,
Without music, but of war, is sounds,

The love we see from day to day,
Of what in this can we come to say?

Expressing ourselves seems all too easy,
Until we realize how hard it is, and then we see.....

Let us see! Let us rejoice,
But let us all realize the choice,

We have before us now and then,
We must save this place, not just one in ten,

For it's the only home we have,
All together on this arduous path,

Let our love not blind us from the truth,
And our irony not allude us in our civil youth.

The earth is where we are, it's true,
And if we can't keep it, we're surely through!