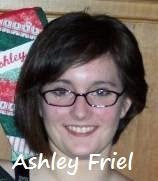 community called "connected Columbia" is scouring the countryside with massively cc'd emails that started with a frightened, worried father.

From a Fans of the Jonas Brothers chat group to MyMissourian and several local listservs, the plea has gone out e-Far and i-Wide.
At first, police considered Ashley to be a runaway, which may have delayed a search effort. But now, they're apparently not so sure.
From: Friel, Jeffrey
Sent: Tuesday, April 21, 2009 1:54 PM
To: MU Univ Registrar All Staff; MU Student Info Sys All Staff
Subject: Missing - Ashley Friel - Please Help Us Find Her
Our daughter, Ashley Friel has been missing since Saturday, April 11th. She was last seen at home in Columbia, MO. She is 15 years old. 5 feet tall and about 105 pounds. She has some scarring on the inside of her forearms. She has brown hair with blonde highlights and hazel eyes. The picture below was taken about 4 months ago. Her hair is shorter now and she does not have her glasses. Please contact detective Curtis Brown at the Columbia Police Department if you have any information on her whereabouts. The number is (573) 442-6131.
PHOTO HERE

Please share this!
Jeffrey Friel
Kim Humphrey, MU Assistant to the Vice Provost for Enrollment Management/Athletics Certification Officer, sent the note to tons more contacts. "One of my co-workers has a missing child. He has asked us to help get the word out."
"This is a co-worker of ours here in Jesse Hall," wrote MU Office of Research compliance officer Jennifer May. College of Education grant writer Larry Nossaman forwarded the appeal to the sizeable College of Education listserv, coe@COE.MISSOURI.EDU.
MU Human Development and Family Studies staffer Alejandra Gudino passed it along to around 100 friends and contacts all over town, @mizzou.edu and @Gocolumbiamo.com; @columbia.k12.mo.us and aol, yahoo, hotmail, gmail, and dozens of others besides.

"This is scary, my own daughter is 13," Gudino wrote. "Please take a look and report. Thank you."
On the Smithton Honor Roll five times, and a winner of a 4H public speaking competition, Ashley told the Missourian when she was just 11 at Russell Blvd. Elementary, "I learned that school can be a fun place or a kind of horrible place, depending on how you look at it."
Looking at the bright side, and hoping for the best, Nancy Harter sent the email plea to me. "Can you put this on your Blog: Missing - Ashley Friel - Please Help Us Find Her!" she wrote.
PS: Ashley Friel, if you're reading this anywhere, lots of folks here miss you and love you. Please, please, please -- come home soon!

On their feet, the packed audience was, at the conclusion of a truly delightful three-hour performance of Wolfgang Amadeus Mozart's The Magic Flute at the Missouri Theatre Saturday night.

With nary flaw nor false note, the MU School of Music's Show Me Opera Company -- under the direction of Ann Harrell and Christine Seitz -- managed several striking feats, most of which involved the same team chemistry that propelled this year's Tiger men's basketball team, but at ticket prices of 15 dollars for adults and five dollars for children 12 and under.

Opera and basketball? Mozart and Mike Anderson? Absolutely.
Sitting right up front with several children, I first noticed team chemistry between the orchestra, positioned in a pit area just below the stage, and the players. Playing off each other in an almost whimsical way at times, conductor R. Paul Crabb and thirty or so musicians matched violins, oboes, trombones, and a host of other instruments with every kind of voice and mannerism, and two all-important stage props -- a "magic" flute and "magic" bells.
So sterling was the interplay that each appearance of the comedic and endearing Papageno prancing and tinkling his magic silver bells became a recurring highlight of the evening.
A German song play, or Singspiel, in two acts, The Magic Flute is Mozart's lightest opera, combining both spoken word and song. It's basically a buddy story about two young guys who couldn't be more different, the handsome and serious Tamino and Papageno, the silly boy who sells birds for a living.

Defeating dark forces while getting between a quarreling queen and emperor, Tamino and Papageno get the girls: Pamina -- the queen's daughter -- and Papagena, whose simple name and light demeanor are an instant hit with her lonely beau Papageno (with an "o").
On stage notables included Kyle Stegall and Molly Clodius, as Tamino and Pamina. Clodius is a slight blonde with a lyric, colorful voice -- maybe a lyric soprano and Stegall an equally slender tenor.

In the range of voices from high to low, for men it's Tenor, Baritone, Bass-baritone, and Bass; for women, Soprano, Mezzo-soprano, and Contralto. Each voice type also has sub-ranges, like "lyric soprano" and "dramatic tenor," for instance.
The best voice of the evening went to the troupe's only non-student, Sarah Tannehill, the Queen, who hit the opera's famous "high F" and sung its most famous aria without a pitchy hitch.

Composers often wrote pieces just for virtuosos to tackle, and the Queen of the Night is this opera's virtuoso performance, demanding extraordinary vocal range. Bass-baritone Jake Clifford tackled the male virtuoso equivalent, routinely dipping into bass territory to hit the opera's equally low F notes, all with the commanding bravado of his emperor Sarastro role.
And last but far from least, the star of the show, Darrell Jason (DJ) Jordan as Papageno. Think Tom Hulce as Mozart himself in the classic film version of Amadeus. Jordan's spirited duet with Kaitlin Foley's Papagena might even have been the performance that stole the show. Papagena didn't appear but a few times, but so sweet, spirited, and delightful was their interaction that these two star-crossed love birds had the entire audience dancing in their hearts and minds.
I understand that this is the first time Show Me Opera performed with an entire orchestra. If that's true, we have a sparkling new force in Columbia's arts scene, an opera company that made a 200-year-old opera contemporary and accessible, by speaking plain but rhyming English and running subtle subtitles over the stage.
The sight of a huge audience on its feet in that stunningly renovated theater was pure Amadeus himself. The master would have been pleased.

3) LET'S DO LUNCH: Houlihans, a surprise hit!
National chain restaurants are not exactly a big hit with the locally-focused, offering -- as they often do -- overpriced, underwhelming fare. But the new Houlihan's, at the Broadway Shoppes near Sam's Club and Lowes, offers an entirely different experience.
The first thing diners will notice is how bright, airy, and friendly it is. Floor to ceiling windows let in plenty of sunshine; a classy, low-key bar sits at the center of the room; and the busy kitchen is partially visible.
But most importantly, the food and service have been consistently excellent and reasonably priced. I've visited four times now, and usually have a wrap of some kind, or their scrumptious fish tacos. The wait staff is friendly and engaging, the food fresh and hot.
Just last week at lunch, a waiter added some insightful comments to a discussion I was having about Martin Luther King's early education as a minister. "For a highly-intelligent, educated black man of that era, the ministry was almost a must," the waiter said. "The black tradition in this country puts an extremely high value on that mix of education and spiritualism."
This led to a brief supposition that the complete removal of God from the classroom may be one root of the achievement gap among black students, so intertwined are education, culture, and religion in the black community (which is true for many cultures worldwide, from Judaism to the Jesuits). Controversial though the notion may be, hey -- sounds like thesis material to me!
But back to Houlihans. With a great lunch, good service, reasonable prices, and a smattering of history and philosophy, what more could you ask for?

4) Alleyway fashion show gets nod despite Fire Dept. concerns
Despite safety concerns expressed by Columbia Fire Marshal Steve Sapp, the Columbia City Council Monday night approved a novel notion: closing a downtown alleyway between 9th and 10th streets to accomodate a 2-day fashion show.
I say -- good for them and the counter-intuitive staff report that supported the idea!
Sapp's concerns were justified, but -- and this is a big but -- they were mostly motivated by City Hall's previous failures to act on alleyway requests, most notably from downtown dynamo John Ott, who has asked both Staff and Council to stop diddling away such a unique, under-used resource. This fashion show may help push the envelope enough to push the city into action, cleaning up, utilizing, and improving our many cool alleys.
Featuring "vintage garments modeled by students," the Stephens College Innovative Fashion Association made the request, for a May 1-2 fashion show between the hours of 4-10 pm. Over-ruling the fire marshal, city staff recommended approval, noting that all hazards would be cleared. The fashion show, called "Stride Against Genocide," seeks to donate funds to families in the African nation of Sudan.
RELATED:
http://www.gocolumbiamo.com/Council/Bills/2009/apr20bills/ReportE.pdf
http://www.stephens.edu/academics/programs/fashion/
-- Mike Martin for the Columbia Heart Beat
Written by Michael Martin