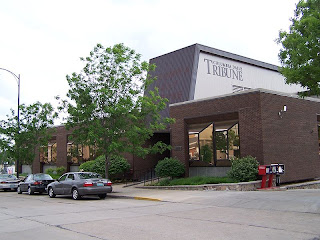 Part One of A Simmering Summer Heart Beat Exclusive Report


Once again, email exchanges released to Columbia Citizens Listserv founder Traci Wilson-Kleekamp under a Freedom of Information request have turned up behind the scenes meetings and lobbying between powerful public and private individuals about yet another important community-wide issue: a vision for downtown Columbia involving controversial stuff like TIFs and eminent domain.

Want a road map to Columbia's future? Wonder why unusual projects like a multi-million dollar parking garage in pedestrian-bike friendly (some say obsessed) Columbia gets a big nod?

Did the Visioning Committee push all this stuff? Was it the mayor's idea? Or your city councilperson's grand plan?


Not hardly. Like the rest of us, those people are apparently out of the loop.

In the loop: a comparatively tiny private group consisting of a mysterious character known only as "The Lobbyist" or "Lobbyist 601"; the former mayor of St. Louis, Vince Schoemehl; Columbia City Manager Bill Watkins and his assistant, Tony St. Romaine; and our recurring master of ceremonies, Columbia Daily Tribune publisher Hank "The Butterfly" Waters.

It all started on January 26, 2009, with an email from Waters to Schoemehl entitled "Having a Drink." Schoemehl manages a St. Louis redevelopment project called Grand Center, and Waters sought his advice on behalf of City Hall -- mostly on his own, it seems, as only Schoemehl and the mysterious "lobbyist601" are included in the initial email exchange.

"Vince, The City of Columbia has a grand but sketchy plan for redeveloping downtown. We are starting to consider projects," Waters writes. "The city is considering TIF and MODESA and eminent domain and anything else we might use to enable downtown redevelopment.

"I reckon your project is akin to what we're beginning. You agree? Once we agree on what you might bring to our table, I will talk with our local officials. I know they will welcome a visit from you once we agree your project is germane to ours. Meanwhile, the lobbyist and I wll discuss possible plans to slip away to St. L. for a social outing, which may not at all be dependent on your kind offer to consult with our downtown planners."

Schoemehl responded the next day. "Hank: Lobbyist 601 reports you'd like to get together on the afternoon/evening of February 12; that works for me. I assume we're doing this in Columbia?"

The highest-yielding TIF projects, Schoemehl advises, are "generally condos/apartments with retail on the first floor; the best increment producer is a grocery store or a hotel. Sometimes a parking garage can be a high impact investment because (a) it can make a District appealing to pedestrians; (b) can give "under parked" real estate enough parking to prosper; (c) can take land that is used for parking lots (by definition, underutilized) and make this land available for development with enough parking to make the parcels attractive."

"This is a major as yet unrealized strategy in Grand Center," Schoemehl notes.

But it's no longer unrealized in Columbia. Almost as if on cue, City Staff and Council members recently approved a controversial $15 milllion parking garage that just this week broke ground. They also approved TIF -- Tax Increment Financing -- for the Tiger Hotel and a mixed use condo/apartments/grocery store complex near 10th and Locust Streets.

But no council members -- not even the mayor -- were in on these initial discussions in which Waters refers to the "local officials" he's invited to the "inside," as it were.

Wrapping up the initial conversation, Schoemehl advises Waters and "Lobbyist601" to "do major capital improvements, like new sidewalks and hanging flower baskets."

So be on the lookout for new sidewalks, hanging flower baskets -- and of course, plenty of butterflies.

Next time: Tony St. Romaine emails the "Chicago TIF Encyclopedia"
(But not to the Council or Visioning Committee)
Written by Michael Martin