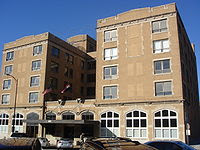 by Mike Martin
for the Columbia Business Times

But before we begin, an important note about our award rules.

Since last year’s awards, there’s been some monkey business involving City Manager Watkins, the State Historical Society, a secretive entity known only as “Hank The Butterfly,” and a pernicious thing called “eminent domain.” Since Mr. Watkins’ wild neckties—which won an award last year—presumably accompanied him on clandestine meetings, they are disqualified from this year’s event.

Award rule 2A specifically prohibits “involvement in any monkey business during the year preceding the awards.”

We apologize to Mr. Watkins’ Daffy Duck, Yosemite Sam, and Bugs Bunny neckties for any dashed hopes, but we must uphold our rules. Daffy, Bugs, and Yosemite will need to take this up with their boss if they wish to be considered again next year.

Now, on to this year’s awards.

If you’re quiet and stealthy, you’ll see the elusive weed inspector measuring un-mowed lawns with a yardstick and taking notes—for a warning letter. An important service because neighborhoods that look neglected attract crime.

9. The Water and Light Guys—in Your Yard

John Glasscock’s Public Works department could take a lesson from the men and women at Water and Light, who don’t just march into your yard like a conquering army, trees, shrubs, and priceless orchids be damned! No, Water and Light does it right and they’re polite! Tree pruning contractor Asplundh even lays down “protective mats” on your lawn when they arrive to trim wayward branches from power lines.

8. The Convention and Visitors Bureau

Let’s see: she helped fund the challenging Shotgun House move (a project I was involved in as part owner); offered meeting space to volunteers from the North Central Neighborhood looking to rehab the old Heibel-March store; and is a continual harbinger of good things in Columbia, including the renovation of JW Blind Boone’s home, #2 on our list. I’m speaking of Convention and Visitors Bureau director Lorah Steiner, whose winning style and personality are just what local tourism needs.

Controversial but caring, Third Ward city councilman Karl Skala takes a licking and keeps on kicking! This year he fended off development community efforts to remove him from a Chamber of Commerce panel, and bucked the majority to support good legislation. Skala invented “coffee house office hours” and answers every constituent email, often at length. He’s as engaged a public official as you’ll find, especially for an unpaid volunteer.

Heading up the Columbia Police Department’s crime-free housing program, the other Tim, officer Tim Thomason, understands an important concept that hasn’t completely sunk in around town: crime begins at the home of a criminal. Notifying landlords about tenant misbehavior and helping homeowners keep their property safe, Thomason—and his program—are more important than ever.

From paying traffic fines to reporting crimes and potholes, City Hall’s eleven-year-old website www.gocolumbiamo.com is a one-stop shop. Tech guru Sam Shelby has presided over several recent innovations, most notably streaming city council meetings online. With fewer journalists covering government these days, the more transparency, the better. (Now if we could only get a web cam in Mr. Watkins’ office.)

He blogs with the best of 'em—as police chief to boot! As retiring chief Randy Boehm's temporary replacement, Columbia police captain Tom Dresner took public communications to a whole new level, squawking, correcting, sparring, informing, and even teasing the local vocals, those ever boisterous members of the Columbia blogosphere.

They risk their lives through flames and smoke to save our lives. That’s all you have to say about Columbia’s men and women in the big red trucks that every kid dreams of driving some day. The television show Rescue Me has immortalized them because rescue us they do.

And so it will no longer be a fire hazard, the Miracle on Fourth Street—the restoration of ragtime pioneer JW “Blind” Boone’s home—is finally underway and tied for second place. Three cheers for the forces who’ve made this happen!

And now, the Number One Thing City Hall does best. (Drum roll! The envelope, please).

Wrestling crooks to the ground; breaking up drug rings; dodging gunfire: It’s all in a day-and-night’s work for Columbia’s men and women in blue, who handle the hardest job in the city under new chief Ken Burton. But it's also a lonely job, with folks clamoring for more officers, less crime—and fewer tasers—but not so willing to make the hard choices—like evicting repeat criminal offenders from rental property—that reduce crime altogether.

Congrats CPD, back in first place for the second year in a row. Keep up the good work!